Just seen this web site for Shevut Rachel, a mention of Yaakov Teitel, the suspected bomber of Messianic Jewish teen, killer of an Arab taxi driver and who volunteered with Yad Lachim for 5 years.

He has already confessed to some of these crimes, has a large amount of evidence against him.   Recently he has been confirmed as not insane. 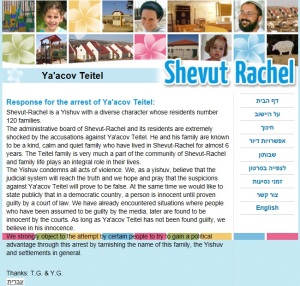 We guess this article is an old one, from when Teitel was first arrested some years ago, and since then much evidence has surfaced.

We ask for the people of Shevut Rachel to not to defend this man.   We support Jewish people to live in Judea and Samaria despite what much of the world that isn’t familiar with history of Jews living in the vicinity historically for a very long time, but we think aligning yourself with criminals doesn’t help your case.    We hope this item can be taken down soon, and we understand you have a close knit community that needs to look out for each other, and there is much concern in the priority in keeping the community safe from Palestinian terrorism, and expanding housing with growing families and new immigrants.

Related: Diagrams from the mind of a killer   –   Tablet magazine’s detailed background on Yaakov Teitel  –   Attack on Ortiz family, Yaakov Teitel and his Yad Lachim connections