Report on acts of religious persecution in Ashdod Messianic congregation.

Our Congregation has recently been experiencing a series of disturbances by members of the Ultra-Orthodox community in our city who have been gathering in front of the congregational building. These individuals have been blocking the entrance to the building, spitting at people, scaring away children, and shouting offensive words at those attending the meeting such as “go back to Russia”, and “You steal souls”. They have also been videotaping the members of the congregation, and thus violating the law regarding the right to privacy. 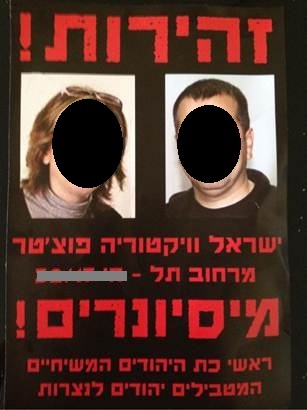 We covered the pictures ourselves. These people are having their privacy violated with details put on posters around the town, a common practice seen with opponents of Messianic congregations elsewhere in the country.   “CAUTION!   ________  Street – Live ______  Missionaries  Main Jewish sect uniform Hmdihiim Hmtbilim Jews to Christianity”

On August 14th an article appeared on channel 9 (the Russian Channel) titled “Brothers in Messiah. Who and how do we need to deal with the Missionary organizations working in Israel”. In this article the host of the show called viewers and asked them the following question: “Do you think that we need to fight against Christian Missionaries?”. The item also showed a clip of the Ashdod chief Rabbi who said “As the one responsible for our city Ashdod, I will fight in any way possible to drive out missionaries from the city, so our city will remain a pure city of Jews only”

We have filed a complaint with the police on the 16th of August.

2 responses to “New persecution at an Ashdod Messianic congregation”